What You Need To Know About Ticks

PLEASE ASK US ABOUT THE TREATMENT AND PREVENTION OF TICKS ON YOUR DOG...!!!

Although ticks are commonly thought of as insects, they are actually arachnids similar to scorpions, spiders and mites. All ticks have four pairs of legs as adults and have no antennae. Adult insects by comparison have three pairs of legs and one pair of antennae. Ticks are among the most efficient carriers of disease because they attach firmly when sucking blood, feed slowly and may go unnoticed for a considerable time while feeding. Ticks take several days to complete feeding.

What is the life cycle of the tick? 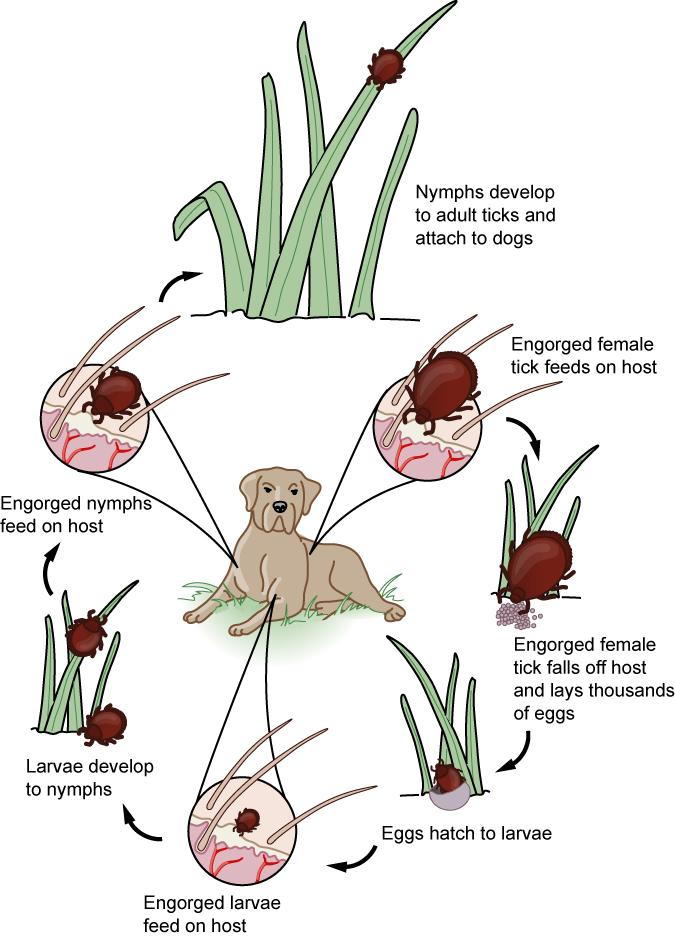 Females deposit from 3,000 to 6,000 eggs on the ground. Adult ticks seek host animals and after engorgement, mate.

Male hard ticks usually mate with one or more females and then die, although some may live for several months. Females die soon after depositing their eggs in protected habitats on the ground. The life cycle requires from as little as 2 months to more than 2 years, depending on the species.

After the egg hatches, the tiny larva (sometimes called a “seed tick”) feeds on an appropriate host. The larva then develops (“molts”) into the larger nymph. The nymph feeds on a host and then molts into an even larger adult. Both male and female adults find and feed on a host, and then the females lay eggs after feeding.

How can my dog pick up ticks?

Ticks wait for host animals from the tips of grasses and shrubs. Ticks are not commonly found in trees. When brushed by a moving animal or person, they quickly let go of the vegetation and climb onto the host. Ticks can only crawl; they cannot fly or jump. Some species of ticks will crawl several feet toward a host. Ticks can be active on winter days if the ground temperatures are above 45 degrees Fahrenheit (7.2 degrees Celsius).

What are the different types of ticks?

There are two groups of ticks, sometimes called the “hard” ticks (Ixodidae) and “soft” ticks (Argasidae). Hard ticks, like the common dog tick, have a hard shield just behind the mouthparts (sometimes incorrectly called the “head”); unfed hard ticks are shaped like a flat seed. Soft ticks do not have the hard shield and they are shaped like a large raisin. Soft ticks prefer to feed on birds or bats and are seldom encountered by dogs or cats.

Although there are at least 15 species of ticks in North America, only a few of these species are likely to be encountered. They include the:

Other tick species may be encountered in various regions. Your veterinarian will consult with you if you need additional information of specific species.

The American dog tick attacks a wide variety of hosts, including humans and dogs, but rarely infests homes. Adults are chestnut brown with white spots or streaks on their backs. Unfed adults are about 1/8-inch long. Engorged females become slate gray and may expand to a length of 1/2-inch. Larvae and nymphs feed mostly on small rodents, while adults feed on dogs, cattle, other animals and humans. These ticks are widely distributed throughout the North America and are especially prevalent in the southern United States and in coastal and other humid areas. They are attracted by the scent of animals, and humans most often encounter them near roads, paths, trails and recreational areas. Although present the year round, American dog ticks are usually most numerous in the spring.

The female dog tick lays 4000-6500 eggs and then dies. The eggs hatch into seed ticks in about 36-57 days. The unfed larvae crawl in search of a host and can live up to 540 days without food. When they find a small rodent or mammal, the larvae attach and feed for approximately five days. The larvae then drop off the host and molt to the nymphal stage. The nymphs crawl in search of a rodent host, attach to a suitable host, and engorge with blood in 3-11 days. Nymphs can live without food for up to 584 days. That’s over a year-and-a-half!

Adults crawl in search of dogs or large animals for a blood meal. Adults can live for up to two years without food! American dog tick adults and many other species can be found along roads, paths, and trails, on grass, and on other low vegetation in a "waiting position." As an animal passes by, the tick will grasp it firmly and soon start feeding. The males remain on the host for an indefinite period of time alternately feeding and mating. The females feed, mate, become engorged, and then drop off to lay their eggs.

The American dog tick requires from three months to three years to complete a life cycle. It is typically an outdoor tick and is dependent on climatic and environmental conditions for its eggs to hatch.

Adult lone star ticks are various shades of brown or tan. Females have single silvery-white spots on their backs and males have scattered white spots. Unfed adults are about 1/3-inch long, but after feeding females may be 1/2-inch long. Larvae and nymphs parasitize small wild animals, birds and rodents, while adults feed on larger animals such as dogs and cattle. All three stages of the Lone star tick will bite dogs and humans. These ticks live in wooded and brushy areas and are most numerous in underbrush along creeks and river bottoms and near animal resting places. Lone star ticks are present throughout the year, but peak adult and nymphal populations may occur from March to May. A second nymphal peak may occur again in July or August, while peak larval activity is reached in mid-June or July.

All three active stages of the deer or blacklegged tick will feed on a variety of hosts including dogs and people. After the eggs hatch in the spring, the very tiny larvae feed primarily on white-footed mice or other small mammals. The following 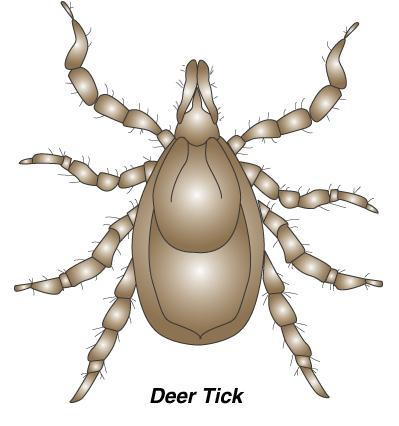 spring, the larvae molt into pinhead-sized, brown nymphs that will feed on mice, larger warm-blooded animals and people. In the fall, they molt into adults that feed primarily on deer, with the females laying eggs the following spring. Adults are reddish-brown and about 1/8-inch long (or about one-half the size of the more familiar female American dog tick).

These ticks are usually found in wooded areas along trails. The larvae and nymphs are active in the spring and early summer; adults may be active in both the spring and fall. The deer or blacklegged tick can transmit Lyme disease and possibly ehrlichiosis to dogs and humans.

The brown dog tick (also known as the kennel tick) is found through most of the United States. This tick feeds on dogs, but rarely bites people. Unlike the other species of ticks, its life cycle allows it to survive and develop indoors. The brown dog tick is found primarily in kennels or homes with dogs where it may be found hiding in cracks, behind radiators, under rugs and furniture, and on draperies and walls.

The adult is reddish-brown and about 1/8-inch long, and usually attaches around the ears or between the toes of a dog to feed. After feeding, a female may engorge to ½-inch long. She then drops off the dog and crawls into a hiding place where she may lay as many as 3,000 eggs. This tick is tropical in origin and does not survive long, cold winters outdoors.

How can ticks be prevented?

There are many different types of tick preventatives available in the marketplace.  Some require less effort on the part of the owner than others.  Some products are available over the counter, while others are only available through your veterinarian.  There are effective monthly preventatives that are applied to the skin at the back of the neck and represent a convenient method of control for these ectoparasites.  Your veterinarian will make specific recommendations to keep your pet parasite free.

What should I do if I find a tick on me or my dog?

Use blunt tweezers or disposable gloves to handle the tick. If your fingers must be used, shield them with a tissue or paper towel. Infectious agents may be contracted through mucous membranes or breaks in the skin simply by handling infected ticks. This is especially important for people who "de-tick" pets because ticks infesting dogs and other domestic animals can carry Lyme disease, ehrlichiosis or other diseases capable of infecting humans. 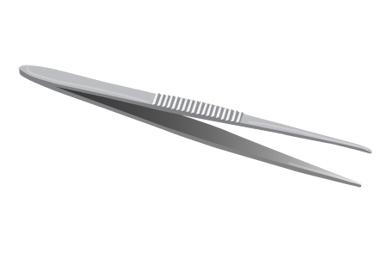 Grasp the tick as close to the skin surface as possible. This reduces the possibility of the head detaching from the body upon removal.

Pull the tick out straight out with a steady, even pressure. Do not twist or jerk the tick as this may cause the mouthparts to break off and remain in the skin, increasing the chances of infection. Continue applying steady pressure even if the tick does not release immediately. It may take a minute or two of constant, slow pulling to cause the tick to release.

After rEmoving the tick, thoroughly disinfect the bite area and wash your hands with soap and water. Home remedies such as applying petroleum jelly, grease, or a hot match to the rear of the tick are not recommended and do not work. These practices cause the tick to salivate and can actually increase the chance of getting a disease.

After removing the tick, you may wish to preserve it in rubbing alcohol. Be sure to label the container with information about the time and place where the tick bite occurred. This activity will help you to remember details of the incident if the rash or other symptoms associated with Lyme disease appear later. This information will also be of help to a veterinarian or physician diagnosing an illness.

WE HAVE THE ABILITY TO TREAT AND PREVENT TICKS FROM INFECTING YOUR DOG, SO PLEASE CALL OUR OFFICE AND ASK ABOUT PRESCRIPTION MEDICATIONS…!!!

This client information sheet is based on material written by Ernest Ward, DVM.

We look forward to hearing from you